What a great day!

Permablitz #9 was held on Sunday the 7th of July at Carol & Mikes house, up on the hills behind Katikati. The sun beamed down, a  cold south westerly wind blew and everybody who came truly experienced the suntrap effect! It was a great way to learn about principle #7 ‘Design from patterns to details’. 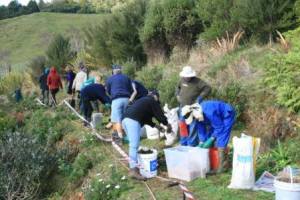 A significant part of Carol’s permaculture design was to make use of her suntrap on her existing north-facing terraces. These had difficult access, but with teamwork we were able to carry large quantities of organic material up to the terraces in buckets! Up there, pumpkin mounds were built. These small no dig beds will break down in the coming months and be ready for Carol’s future bumper pumpkin crop! 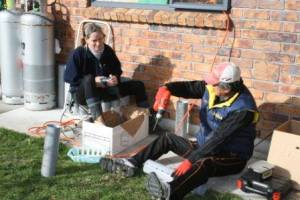 Fancy low maintenance – no production  shrubs were put through the mulcher and ‘Worm towers’ were drilled using pieces of pipe. These were inserted into the newly cleared vege beds which will house Carol’s growing population of free-range worms. It is hoped these will stimulate soil activity in the vege beds and give Carol somewhere useful to put her kitchen scraps! 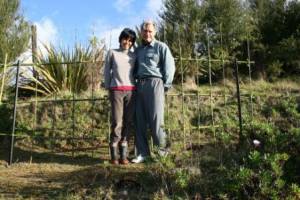 Carol & Mike got two lovely new bean frames built for them. Just as these were being finished,  someone opened the bucket to Carol’s secret possum repellant. OMG! You had to be there. If you were downwind at the time, you would feel very sorry for all the Possums on the Kaimais that venture near Carol’s garden, boy, are they going to be repelled!

What fun we all had, and what a great vibe there was on the day. Thanks to everybody who shared in the decision making, taking on leadership roles and for your contributions to some great discussions. Carol & Mike seemed to be glowing afterwards! They will reap the rewards of all their involvement with permablitz in the coming growing season and they both really deserve it!

Blitzing the BOP community one garden at a time